The Hall of Fame’s Most Under-Appreciated Players: Part 4

Welcome to Part 4 of this series.  So far, our roster of the Hall of Fame’s most under-appreciated players looks like this:

Not a bad team.  Let’s flesh it out now with a center fielder and a right fielder, shall we? For one thing, Ashburn had a higher career WAR (60.2) than either Duffy or Carey, and about the same as Hamilton.  Also, Ashburn, as far as dWAR is concerned, was a better defensive center fielder than any of them.

Ashburn’s range in center field was excellent. He led the N.L. in Range Factor ten times in his career.  Ashburn also led all outfielders in his league in putouts nine times, and assists four times.

In just his third season in the Majors, at age 23, Ashburn was a key member of the Phillies “Whiz Kids” team that won the N.L. Pennant by two games over the Brooklyn Dodgers.

Ashburn led the league that year in triples with 14 while batting over .300 and playing solid defense in center field.

As a hitter, Ashburn didn’t generate much power (just 29 career homers), but he was an on-base machine.  He finished first in the N.L. in walks four times, and in hits three times.  In six seasons (including his first and last) he topped a .400 on-base percentage.

On the other side of the ledger, Ashburn was very difficult to strike out.  During his twelve prime years with the Phillies (1948-59), Ashburn never struck out as many as 50 times in a season.

For eight straight seasons, (1951-58), Ashburn scored at least 90 runs in every season.  He also led the league in hits three times, topping 200 hits in each of those three years.

Despite those numbers, and the reputation of being one of the greatest lead-off hitters, and excellent defensive center fielders of his generation, Ashburn never received much more than 40% of the vote of the BBWAA.  After his name fell off the Hall of Fame ballot in 1982, it wasn’t until 13-years later in 1995 that the Veteran’s Committee finally inducted Ashburn into the HOF.

Richie Ashburn died a couple of years later, in 1997, at age 70.  He is still among the Phillies’  all-time leaders in several offensive categories such as base hits, runs scored, walks and on-base percentage.

Right Field – Harry Heilmann:  Harry Heilmann was, along with Ty Cobb, Sam Crawford and Al Kaline, one of the greatest outfielders in Detroit Tigers history.

Heilmann was one of the few baseball players born on the west coast before the turn of the twentieth century.  Born in San Francisco on August 3, 1894, Heilmann debuted with the Tigers in 1914 at age 19.  Given his German heritage (on his father’s side), one has to wonder if this young German Catholic teenager didn’t experience at least some bigotry around America as the First World War settled like a steel cloud over Europe that summer.

Heilmann didn’t stick with the big club immediately, and spent the summer of 1915 in the minors.  But by 1916, he had become a permanent resident of the Detroit outfield, playing alongside Ty Cobb.    Through 1920, Heilmann was a very good player, though not yet a great one.  Heilmann’s breakout season was 1921, when he turned 26-years old. 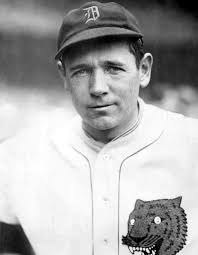 Heilmann’s On Base Plus Slugging Percentage of .930 ranks ahead of Hank Aaron, Tris Speaker and Frank Robinson, among others.  His career OPS+ (148) ranks 40th all-time, ahead of Willie McCovey, Mike Schmidt and Willie Stargell.

Heilmann finished in the top five in MVP voting in his league four times, and he was the best player in the A.L. in 1925, posting a WAR of 6.5.  His career WAR of 67.3 is better than HOF players Ed Delahanty, Tony Gwynn, Al Simmons, Eddie Murray and Duke Snider.

Despite all of these accomplishments, Heilmann was not elected into the Hall of Fame until his 13th year on the ballot in 1952.  Unfortunately, Heilmann had already died of cancer in 1951.  While on his deathbed, however, his former teammate and sometimes nemesis Ty Cobb came to visit him.  Cobb, in a rare act of empathy, told Heilmann that he had been voted into the Hall of Fame that summer so that Heilmann could die a happy man.

Which just goes to show, sometimes good lurks in the hearts of even the coldest men.

NEXT UP:  The Pitchers