I’ve always been fascinated by the history of the Negro Leagues.  Recently, I was wondering about which of the old Negro League parks, if any, were still in existence.  I suspected that only a small handful have survived through the years.  That turned out to be an accurate assessment.  Here’s some information about the last three Negro League ballparks, either still in use or at least having escaped the wrecking ball, in which Negro League players used to regularly ply their trade.

To be clear, if you search online you will find several other venues that once hosted Negro League players or teams at one time or another.  I chose not to list several of them because they were merely locations where Negro League teams simply barnstormed through on the circuit, or they have been so modified that almost none of the original field exists (Ammon Field, now Josh Gibson Field in Pittsburgh, comes to mind), or at best sketchy evidence that Negro League teams played there at all (West Field in Munhall, PA.)  Having said that, if you come across credible information that I’ve missed a significant Negro League home ballpark which still stands, by all means let me know.

Though a short 315 feet down the left-field line to the wall, it was a very deep 415 feet to right-field, and a cavernous 515 feet to center.  The park originally held between 8,000-9,000 customers.  The original metal grandstand still stands.  The park was used by local Little League teams in the 1950’s, and later by teams from the local Catholic high schools.  Once those schools closed, the park was left abandoned.  It hasn’t been used at all for the past few years, though structurally, it is still sound.  The pitcher’s mound and the original flagpole are also still there. A’s owner Charlie Finley leased the park from 1967-75 for the Double-A minor league Birmingham A’s.  Hall of Famers Satchel Paige and Willie Mays each played at one time in their careers for the Black Barons.  The Black Barons played their final game in 1963.

Until 1987, the Chicago White Sox Double-A affiliate, the Barons, called Rickwood home before eventually moving out to the suburbs.

It is 90 feet from home-plate to the backstop at Rickwood Field.  Thus passed balls and wild pitches could be exceptionally dangerous.

The first legally integrated game at Rickwood for both players and fans took place on April 17, 1964.  A representative of the Ku Klux Klan promised that his boys would not make any trouble that day.

Interestingly, Rickwood Field actually has a blog on WordPress.com.  Here’s the link:

Today, Rickwood Field is maintained by the Friends of Rickwood who continue to work on restoring this facility which hosts exhibition games for local amateur and semipro teams.  Some scenes from the 2012 film, “42” were filmed in this park. 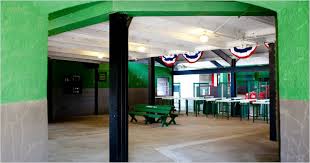 In its prime, Hinchliffe held up to 10,000 fans, though sometimes even more crammed the place for special events.   Hinchliffe was also used for football, boxing and even auto racing.

An oval-shaped park similar to the L.A. Coliseum or New York’s old Polo Grounds, the distance to straightaway center-field was 460 feet from home-plate.  One member of the Black Yankees, George Crowe, was called up to play for the Major League Boston Braves in 1952.

In 1957, playing in place of the injured Ted Kluszewski, Crowe slugged 31 homers and drove in 92 runs in 133 games, at age 36.  Many other fine Negro League stars played at Hinchliffe as well, though official records are generally incomplete.

The Black Yankees left in 1948, an ironic victim of desegregation in Major League Baseball.

Today Hinchliffe Stadium is the property of the Patterson, N.J. school system, though no games have been played on this field since 1997.  The Friends of Hinchliffe Stadium continue to try to raise funds to renovate the park for potential future uses, and to preserve this historic place for posterity.

There are many more excellent photos of Hinchliffe Stadium at this link:

If you would like to donate to the Friends of Hinchliffe, here’s a link to their website:

22 thoughts on “Last of the Old Negro League Ballparks”