Hall of Fame of the Heart

What does reason know?  Reason only knows what it has succeeded in learning. -Dostoevsky

If you could build your own Baseball Hall of Fame, what kind of place would it be?

You may not even have any real problem with that.  Intellectually, you probably understand the statistical reasoning that has served to exclude some of your favorite players.

But suppose we were to construct a Hall of the Heart, that is, a place (or, more accurately, an idea), where those players who captured our imagination all those years ago would be enshrined?  In fact, when we use the term “Hall of Fame,” it begs the question, famous to whom?

If fame is the fleeting, fickle standard by which we are to choose our immortals, it is by definition an extremely subjective standard.  Just because the evolution of The Hall has coincided with a revolution in statistical analysis doesn’t necessarily mean that the membership of the former should be almost entirely dependent upon the mathematical equations of the latter.

Or, as the 19th century Russian writer, Dostoevsky, stated in Notes From Underground:

Now, don’t get me wrong here.  This is not a diatribe in favor of the so-called “traditionalist” view of baseball.  Nor am I suggesting that the statistical work that has been done by the modern, progressive wing of the baseball universe has been accomplished by “brazen fops.”   The fact is that the “traditionalists” use stats just as readily to make their particular cases just as often and with as much gusto as those of the sabermetric persuasion.  They just choose to use a different set of (generally older) stats.

What I’m advocating here is a return to the idea of baseball as fun, as entertainment, and as the fount of the dreams of youth.  For that, we have to look inward, into our irrational, passionate selves.     We never cheer a 1.040 WHIP, but we do cheer the unlikely triple hit by the chubby kid that scores the go-ahead run in the home-half of the eighth inning.

What follows, then, is (perhaps inevitably) a list of the players who inspired my imagination as a child, and on into my teens and early twenties.  They are the by-product of time and place, and are of a distant genetic lineage to the gods and immortals of old:  Hercules, Odysseus, Achilles, Agamemnon, Heracles, Theseus, etc.

I will strive for brevity in my comments about each one of my heroes.  My list, after all, is not intended to convince you of anything at all, except of my own vulnerable humanity.

It is also not in any particular order.  Let the imagination do its work, uninterrupted:

2)  Freddy Lynn:  Inspiration in the summer of ’75 for so many backyard dives and catches.  To play so fearlessly, even for one season in the sun, is what it’s all about.

3)  Steve Garvey:  Though it’s not a Steve Garvey model, I bought a first-base mitt to be like him.  I still have it today.  Handsome, dependable, heroic and a star, in the mid-1970’s, he was everything I could ever hope to be.

4)  Rusty Staub:  There was always something mysterious about him.  Rusty sometimes wore a black glove while batting, he came from foreign lands (Montreal, by way of Houston), and he was also a practicing chef.  He was like a secret agent masquerading as a baseball player, and he had a certain swagger about him.  He was like Robert Vaughn in The Man From U.N.C.L.E.  crossed with Robert Vaughn in The Magnificent Seven.

5)  The Boys of Summer:  This was the first grownup book I ever read.  I was around ten or eleven years old, and while reading it, I wanted the entire Brooklyn Dodgers team to be my friends and family.  Roger Kahn also made me want to be a writer, if I couldn’t be a ballplayer. 6)  Christy Mathewson:  Although he played long before my time, I was struck by his story, his boyish good looks, and his integrity.  Mathewson was college educated.  His manager, John McGraw, was an old-school tough without much formal education.  Yet McGraw loved Mathewson like a son.  It was the sort of relationship I coveted with my father.

Mathewson was gassed in a training accident in 1918 during the First World War.  He would die young, at age 45 in 1925, of tuberculosis.

Like Achilles, he would shine brightly all too briefly.  He was both literally and figuratively a warrior, and the war would contribute to his early demise.

7)  Keith Hernandez:  Keith was, without doubt, the greatest fielding first baseman I’ve ever seen.  He took charge of the infield in a way I’ve never seen a first baseman do either before or since.  Always fearless and accurate when throwing across the diamond, he cut down more base-runners in a week, than I’ve seen some do in a year.

Keith was also a great clutch hitter.  Never a big power threat, Keith would spray line-drives all over the place, usually when they mattered most.

He also had a smoking habit, and, although it never inspired me to start smoking myself, it did make him seem more accessible and human.  He wasn’t some body-building athlete intent on perfecting his physique.  He was a baseball player with the God-given ability, the natural instincts and the competitive drive to succeed in a very difficult sport.

8)  Will “The Thrill” Clark:  An intense southern boy from the bayous of Louisiana, Will Clark was  nothing if not a competitor.  The eye-black he wore made him look like a special forces sniper.  Another first baseman, he helped get me back into collecting baseball cards in the late 1980’s.  I wanted to collect every card that featured him, and I wanted to copy his smooth, left-handed swing.  I was always happy when the Giants came to town so I could watch him play.

If the character, Swan, from the movie, “The Warriors” was a pro baseball player, he’d be Will Clark (and wouldn’t the Baseball Furies just love that?)  Swan is the very first Warrior you see in this clip. The movie is loosely based on Homer’s, The Odyssey.

9)  Eric Davis:  Eric the Red.  A contemporary of Will Clark, he played with a slash and burn style reminiscent of the Norseman of myth and legend.

I absolutely loved the way Eric Davis, in his prime, made the game of baseball look so easy that he might soon grow bored with it and find another hobby.

He could steal bases, hit homers, range around the outfield, score runs, and he played with just enough of the toughness of the streets of L.A. where he grew up.

Later, in 1998, Davis also made a heroic comeback from colon cancer to play remarkably well for the Baltimore Orioles.

Eric Davis and I also share a birthday, May 29th.  He was born exactly one year before me.

10)  Jeff Bagwell:  Bagwell grew up in my home state of Connecticut and is just a few years younger than I.  Throughout the ’90’s, Bagwell was my favorite player.  He was powerful, he could really run the bases, which was most unusual for a first baseman, and I loved his wide-open stance.  An aggressive player, Bagwell basically had no weaknesses in his game.  If the god Apollo could play baseball, he would be Jeff Bagwell.

Oh, and some guy who used to pitch for the Red Sox named Babe Ruth.

Now that’s a Hall of Fame for which I would happily pay the price of admission.

Who would you include in your irrational, sentimental Hall of the Heart? 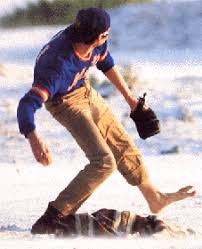 26 thoughts on “Hall of Fame of the Heart”